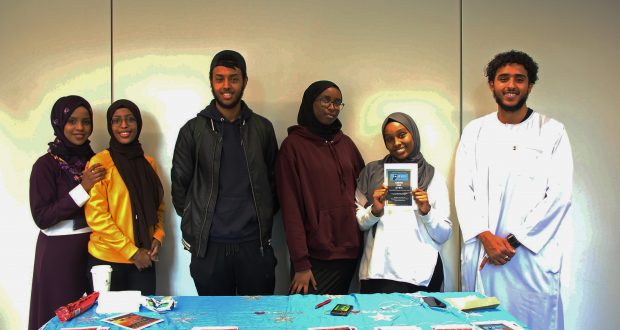 The KU Somali Society started a collection campaign of hijabs and abayas for women in need in a Syrian refugee camp.

The society is collecting scarves and abayas, a dress-like garment that some Muslim Women wear, for One Nation, a charity working on the ground in the war-torn country.

A spokesperson for One Nation said that other private schools were supporting the project, but Kingston University was the only university involved.

“Seeing as there’s a large Muslim and Middle Eastern community in Kingston University, we thought that we could use the opportunities and the resources we have to hold this collection,” said Suleega Arab, 19, vice president of the Somali Society and pharmacy student.

All items gathered at the University will then be taken by One Nation directly to the women in the refugee camp of Atmeh, a village in northern Syria, 10 kilometres away from the Syrian-Turkish border, and its surrounding areas.

The camp currently is home to around 50 refugee families.

Mohamed Sghaier, 21, events manager at the Somali Society said: “The great thing about the charity is that when you give them something, either money or products, they will show you updates, so they’ll show things being distributed on the ground so it gives people an idea of how it’s done.”

Arab said collecting 100 hijabs would be a safe estimate, however, she expected a lot more since each individual has at least 5 plus headscarves at home that they could bring in.

Halima Haque, 20, a history student, said her mother was very excited about donating, so she brought in ten abayas for the collection “to provide women at the camp with something that it would be hard for them to find in the situation that they’re in.”

“For Muslim women, if you’re more into your modesty and covering up, it’s a comfort to have an abaya or something you’re familiar with and you can just be comfortable in,” she said.

“It’s beyond imaginable what they’re going through so I think it’s just about doing what we can in whatever little way we can do it”.

Amel Tadmi, 22, vice president of the Islamic Society said that the collection ” is a very thoughtful and great initiative by SomSoc for women in Syria” and said that humanitarianism acts are an essential component to the Islamic way of life.

“Yhey are a major principle in Islam and there are several Quranic and prophetic texts which encourage humanitarian acts. At the Islamic Society we highly encourage these greats acts of humanitarianism to help those in need across the world,” she said.

One Nation regularly undertakes other projects in Syria such as distribution of food, clothes, and sponsorship for orphans and widows. It also launched donating campaigns for Yemen and the Indonesian tsunami.